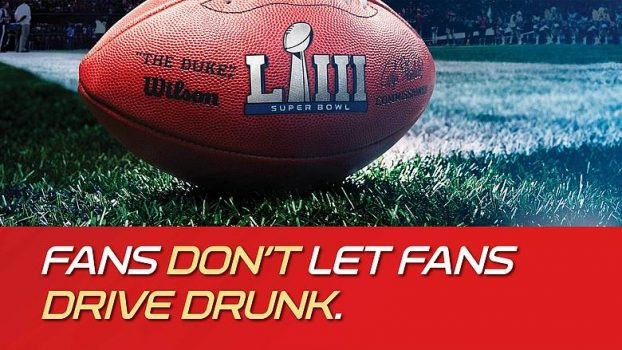 NY State Police and local law enforcement plan to tackle Drunk and Impaired driving on the weekend of Super Bowl Sunday – 2019. The crack down for DWI/DUI patrols will include marked and unmarked cars and sobriety checkpoints resulting in a very high arrest rate for New York. Remember: impaired driving doesn’t just refer to alcohol, it can also include marijuana and prescription drugs. The police will also be looking for people using their phone when behind the wheel.

The drunk drving/driving while impaired campaign will run from Saturday, Feb. 2 until 4 a.m. on Monday, Feb. 4.

During Super Bowl Sunday, occurrences of drunk driving are 22% higher than a typical Sunday. And during the 2018 Super Bowl campaign, state police arrested 120 people for impaired and drunk driving and issued 7,733 tickets.

Driving under the influence of drugs or alcohol can devastate your life with high fines, possible incarceration, criminal record, license and revocation. * Plan a safe way home before the game begins. * Before drinking, designate a sober driver.

WAYS TO AVOID A DWI/DUI:

* Make a Plan before you go to safely get home.
* If you’re impaired, use a taxi or UBER ride sharing service, or call a sober friend/family member or use public transportation.

* If you see an impaired driver on the road, call 9-1-1 immediately.

Remember, fans don’t let fans drive drunk! If you see another fan that needs help calling a ride, be sure to get them assistance. We hope you have a winning Super Bowl Sunday! Drunk and Impaired Driving is ALWAYS THE LOSING PLAY.

New York’s Tough Penalties for DWI, known as Leandra’s Law, include two major components; one to toughen the penalties for driving impaired with childen in the vehicle and one to require ignition interlocks for those convicted.

Important provisions of this law include:

What exactly does the law require?

Under Leandra’s Law, when anyone is convicted of any felony or misdemeanor drunk driving offense the court will be required to impose – in addition to any fine, jail or prison sentence – a period of probation or conditional discharge. During that period, the individual will be required to install and maintain an ignition interlock device, for at least 12 months, in any motor vehicle they own or operate.

How does an interlock device work?

Couldn’t the individual under supervision bypass the interlock simply by having someone else breath into the device to get it started and then drive away, or leave the car running while they are in a bar and drinking?

No. At random intervals after the engine has been started, the device will require additional breath samples. If a sample is not provided or if the blood alcohol concentration is .025 percent or higher, the device will record the event, warn the driver and then start an alarm (horn honking and/or a loud interior alarm) until either the ignition is turned off or a clean breath sample is provided. Additionally, some of the devices have built-in cameras and keep a photographic record of who provides the breath sample.

Who will install the device?

When someone is convicted of impaired driving and ordered to have an interlock installed, he or she will be referred by local ignition interlock monitors to manufacturers and their installation service providers designated by the state.

What do ignition interlock devices cost and who will pay for it?

The cost depends on the vendor and the level of ignition interlock service, but generally costs approximately $100 for installation, $100 for de-installation and a monthly fee of $100. In general, it is the responsibility of the convicted drunk driver to pay all the fees associated with installing and maintaining these devices.

Information from the NYS Office of Alcoholism and Substance Abuse Services

The NYS Office of Alcoholism and Substance Abuse Services (OASAS) is committed to reducing the level of substance abuse problems and keeping roadways and the public at large safe by assuring high quality prevention, intervention, treatment and recovery services to individuals charged with or convicted of an impaired driving offense. The goals of these efforts are to reduce the risk of DWI recidivism and additionally address the individual’s use of substances in general to reduce rates of addiction and impairment problems other than DWI. To achieve these goals, OASAS in partnership with the NYS Department of Motor Vehicles (DMV) and the Governors Traffic Safety Committee is implementing a multi-faceted Impaired Driver Services Initiative that will significantly improve and standardize the quality and efficiency of services provided to impaired drivers across the state.

Drunk and Impaired Driving is ALWAYS THE LOSING PLAY