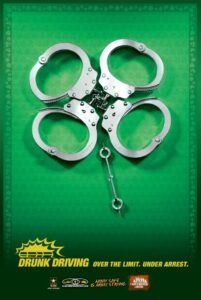 Today the date of March 17th is perhaps best (and most infamously) known as an American invention, initially intended to celebrate the Irish diaspora in the United States, and now a day when “green beer and Guinness” flows freely, to the point of being the fourth-largest drinking holiday in the country resulting in Drunk Driving and Drinking and Drugging resulting in a high rate of DWI and DUI arrests in New York.

Copious alcohol consumption, to the point of binge drinking, has become an unfortunate characteristic of the event, so much so that police departments around the country have had to ready themselves for a rash of ill-advised and alcohol-fueled behaviors that put people at risk.

The National Highway Traffic Safety Administration found that 252 people died as a result of drunk driving on St. Patrick’s Day (or the days immediately following or preceding it) between 2011 and 2015. By one estimate, an alcohol-related car accident takes place every 72 minutes on St. Patrick’s Day, and as many as 75 percent of those accidents happen when one of the drivers has drunk over two times the legal limit. The National Institute on Alcohol Abuse and Alcoholism found that the time between fatal alcohol-related car crashes on or around St. Patrick’s Day was only 46 minutes. Call DWI/DUI Criminal Attorney expert Frank X. Casale if you need legal representation at 631-293-3332.